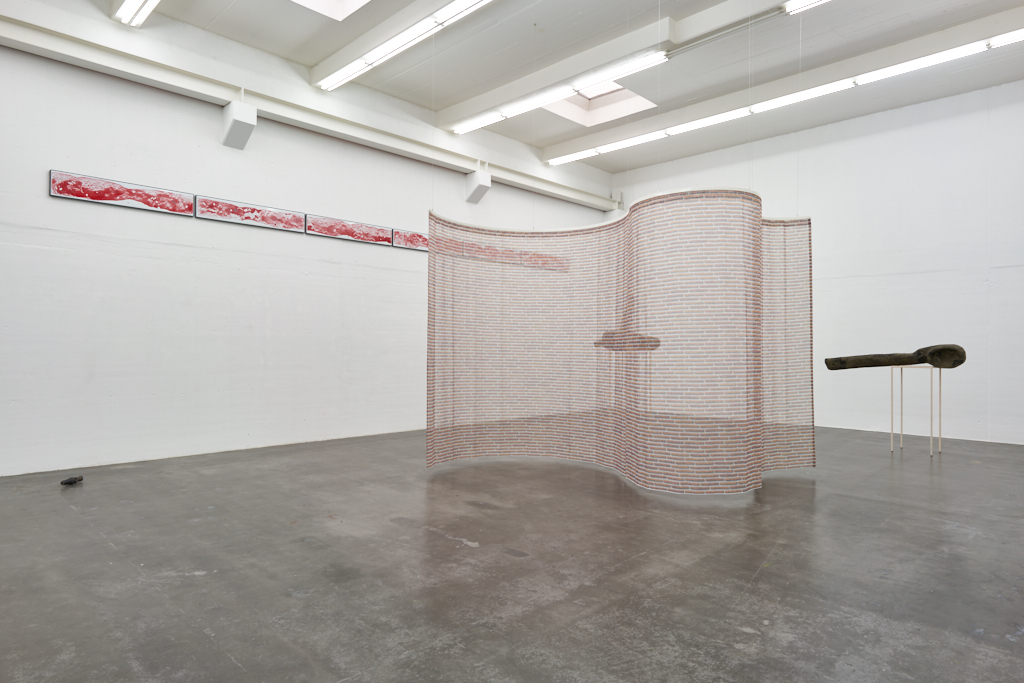 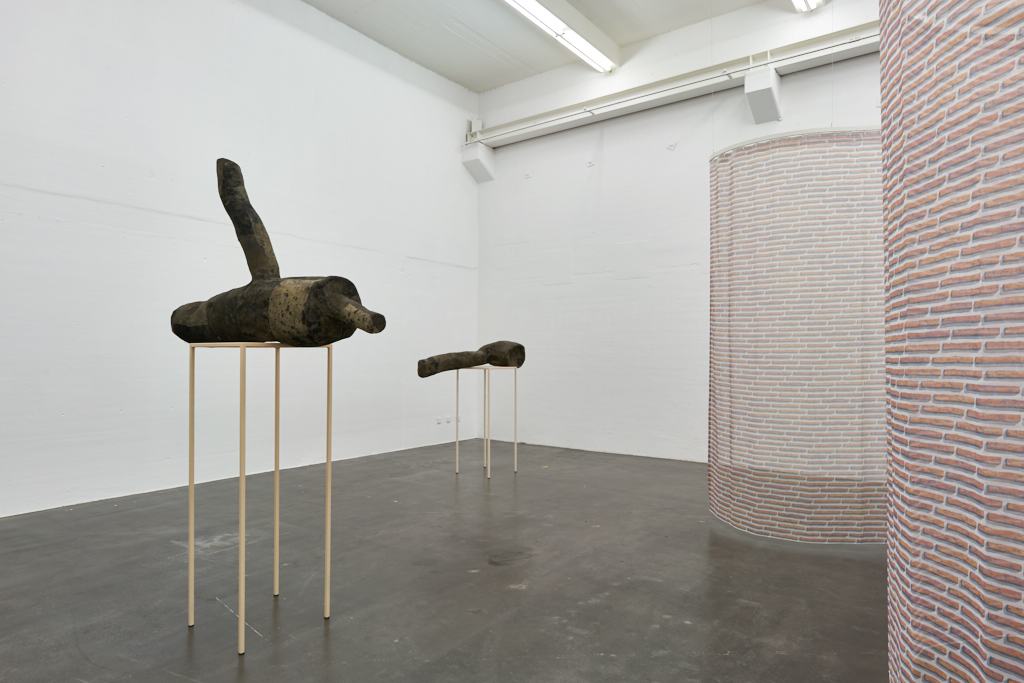 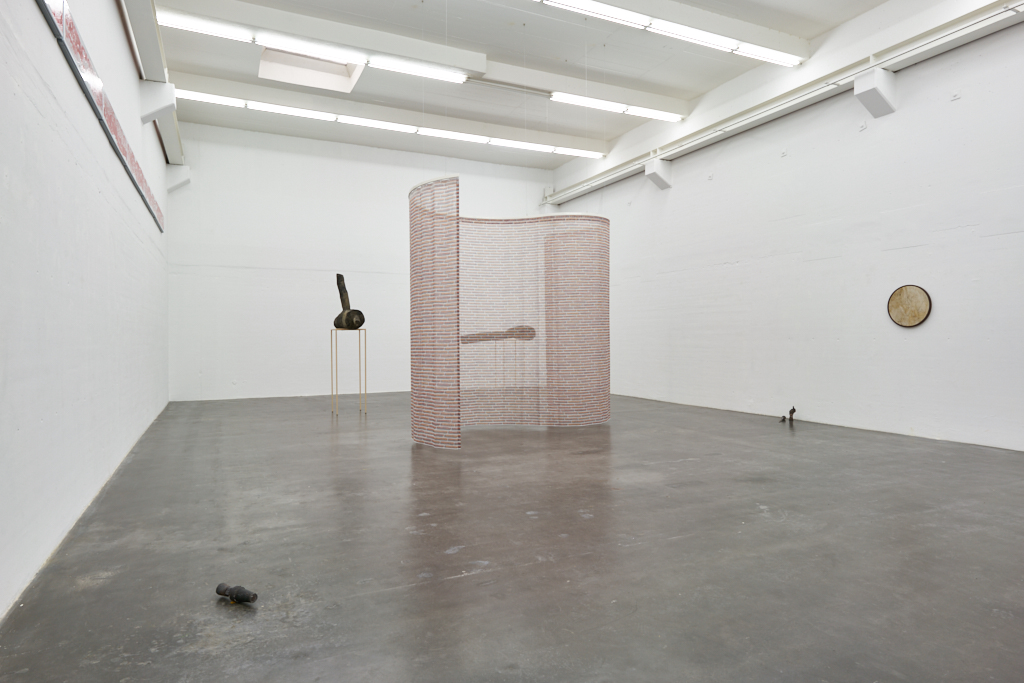 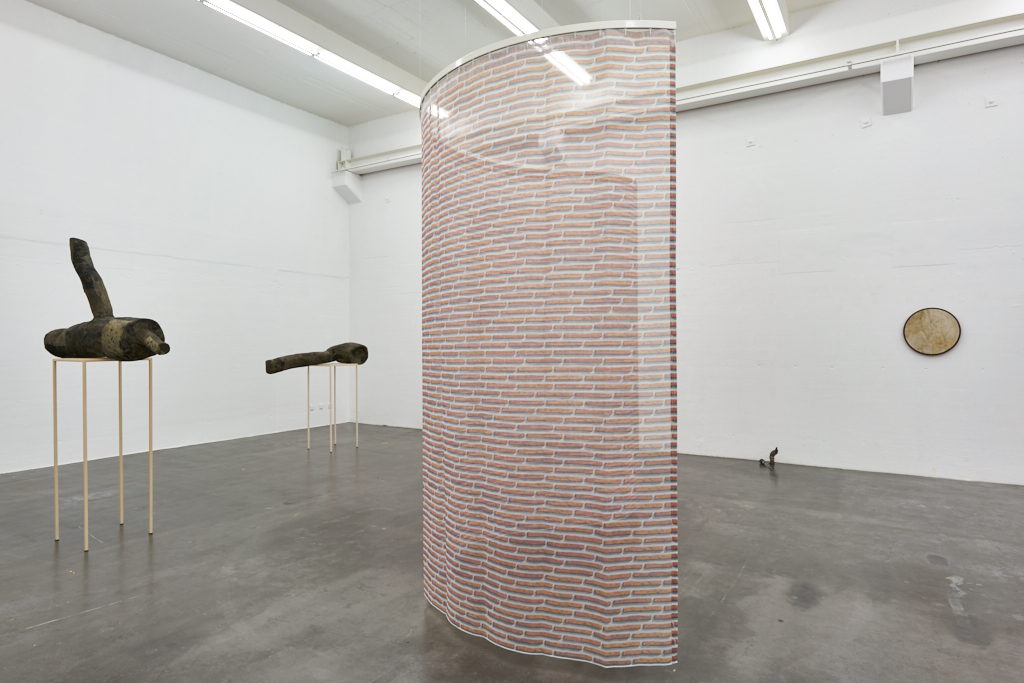 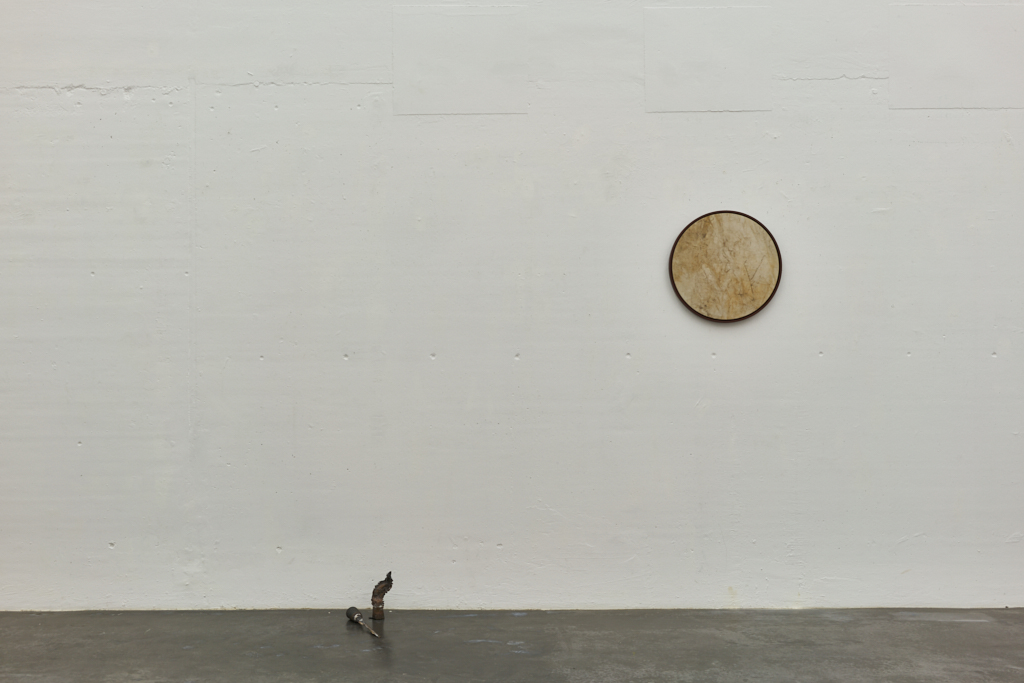 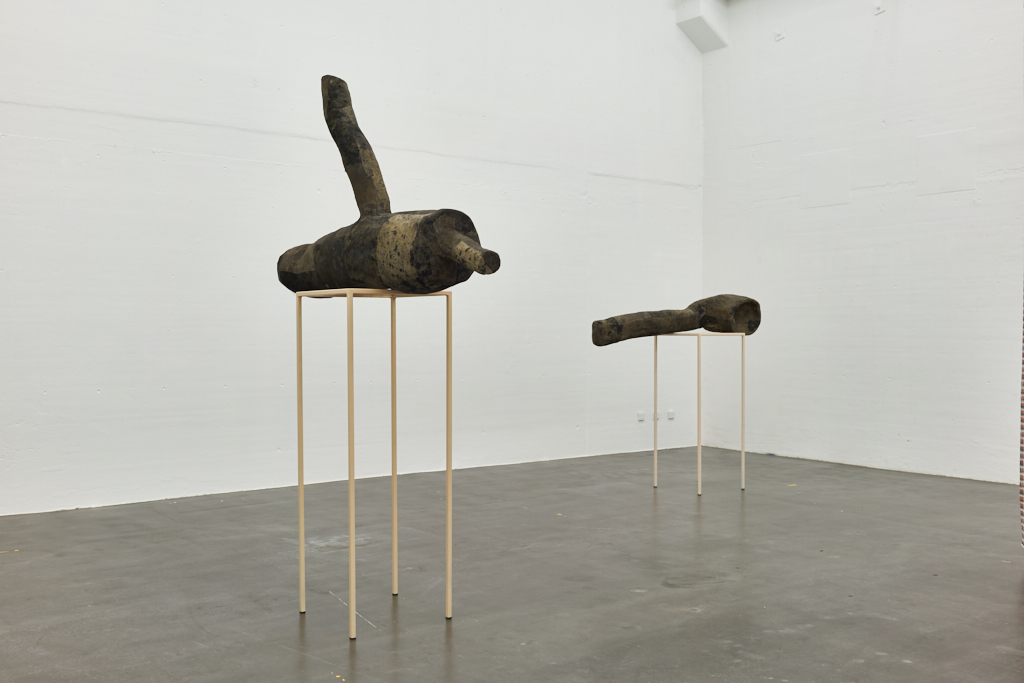 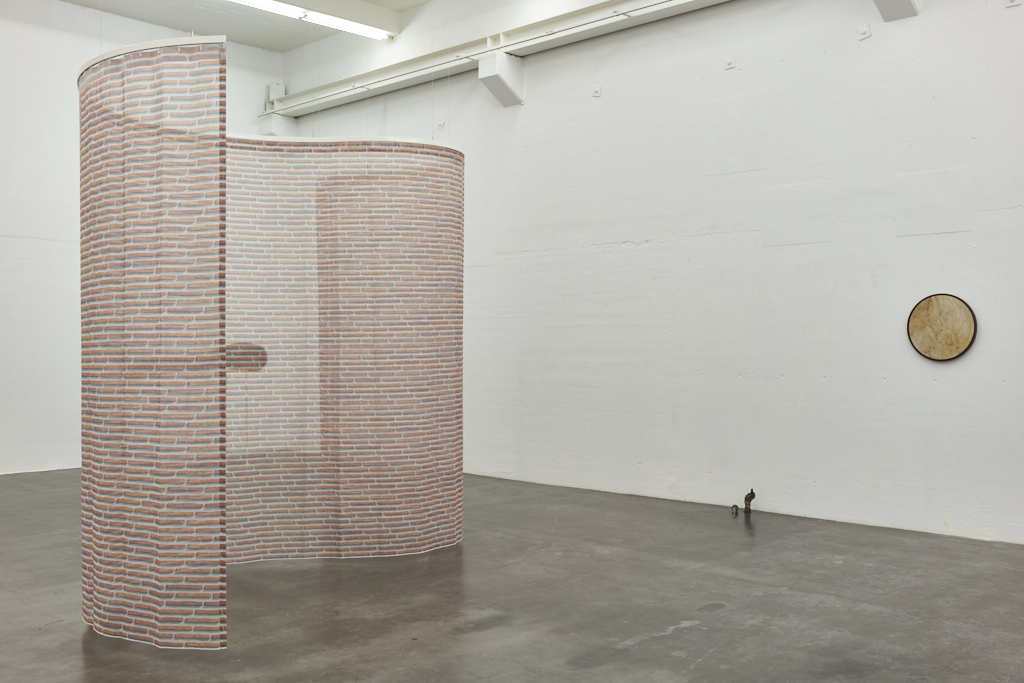 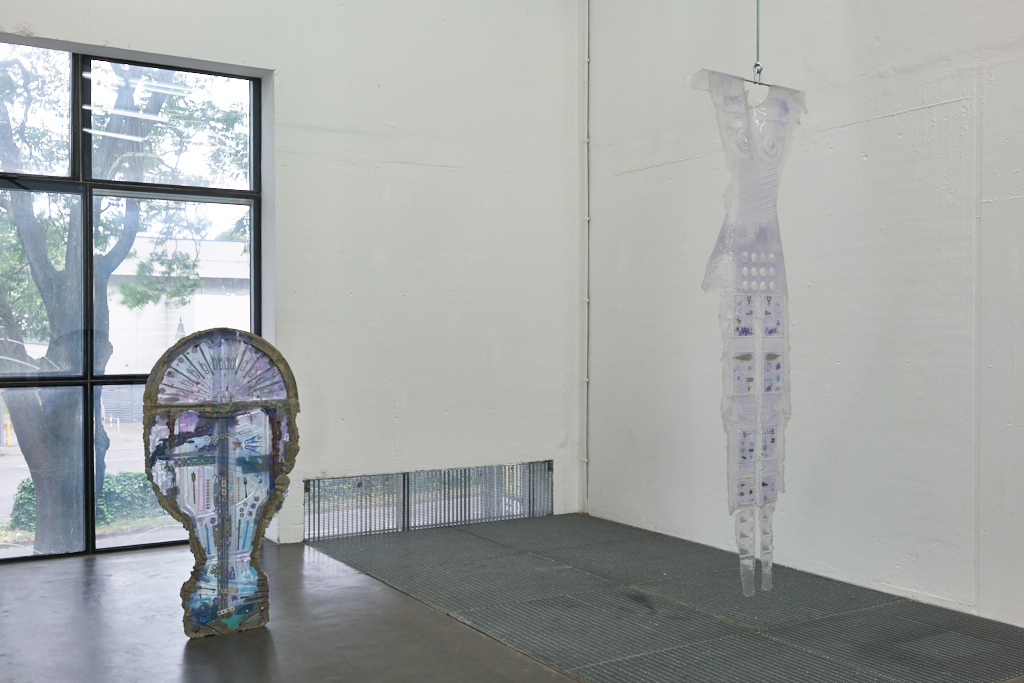 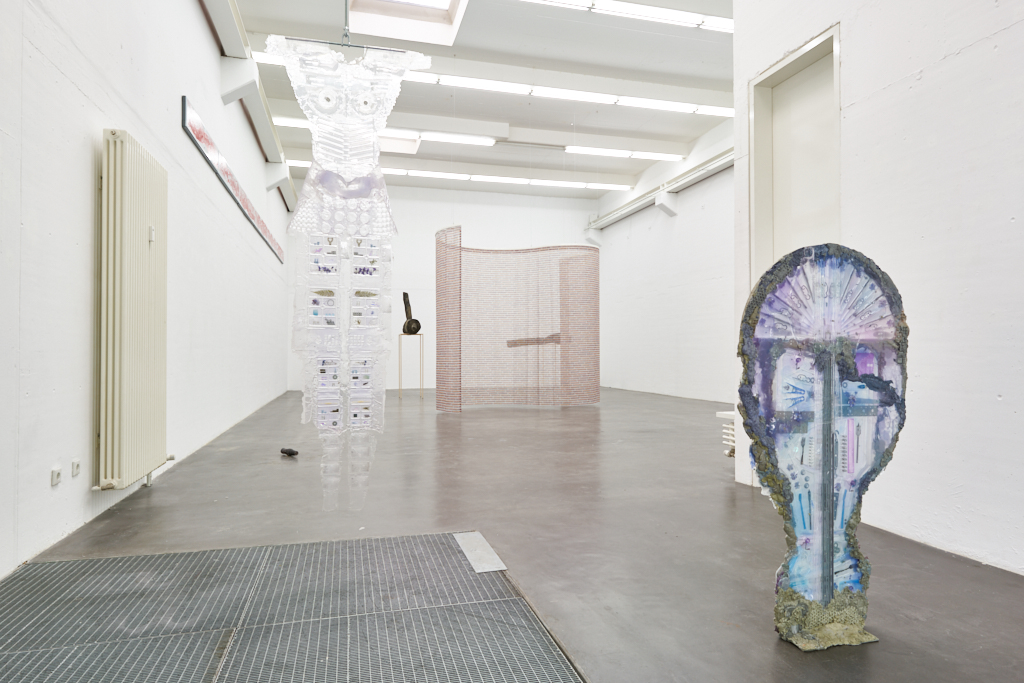 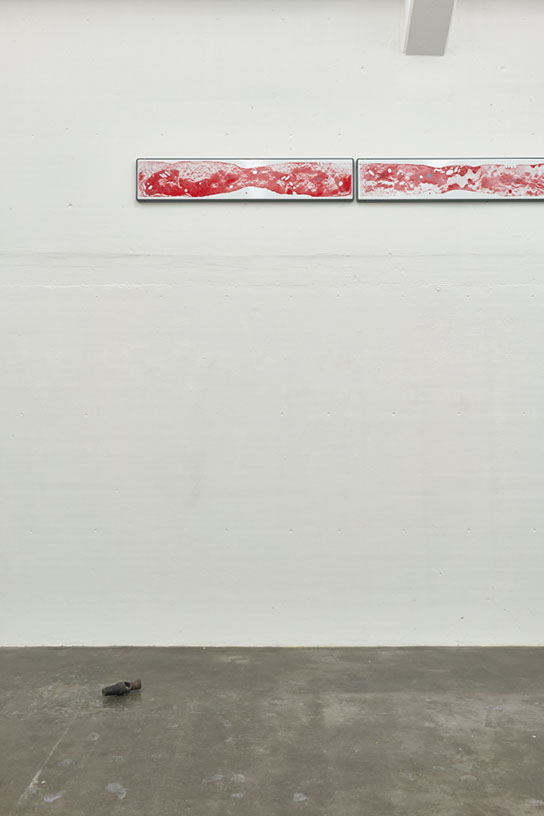 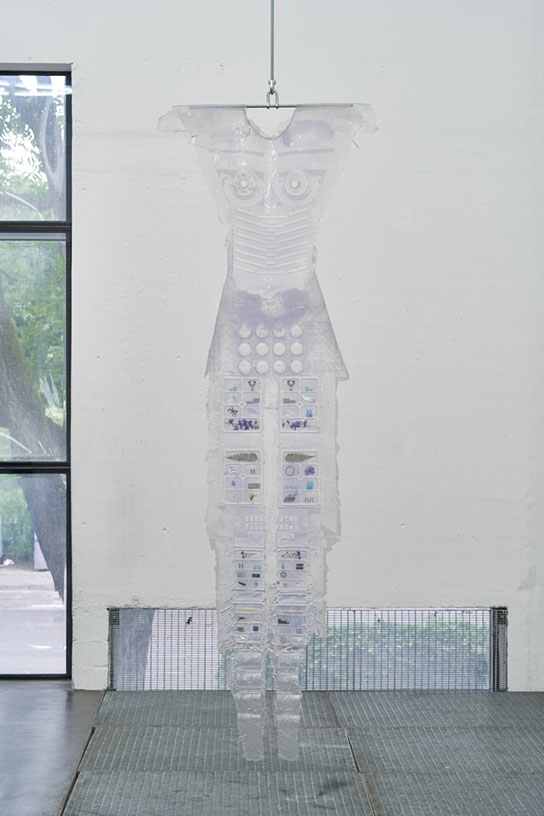 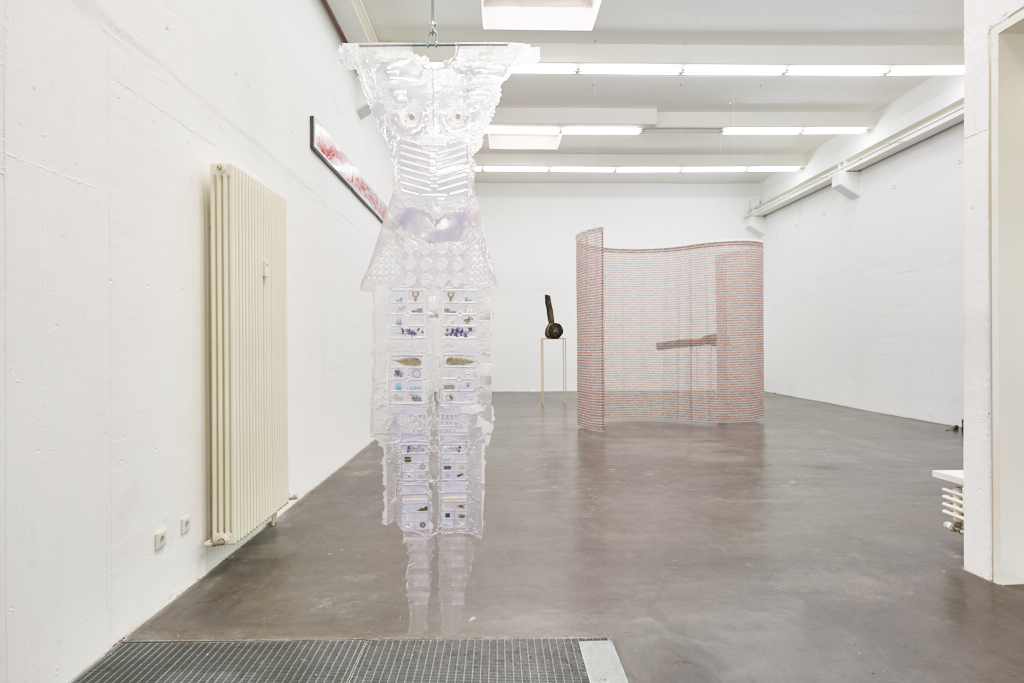 Vein Section is a group show which tells the story of that which remains. In a world without humans, what survives is a different kind of life. An archaeological view of this post-industrial reality reveals a landscape of materials - bodies of work that bear witness to the rise and fall of mankind and its growing dependence on technology. In this context, materiality gains a life of its own.

Evolution is slow but steady, and we are witness to transformations between what is and what seems, between hard and soft, fluidity and rigidness, static and active. The objects betray their maker in the sense that they are ambiguous about their provenance; they seem to exist for themselves, born out of themselves. They find their own way in the exhibition space and, with the public’s mind as a go-between, tell their own story. To be present is to gather meaning; together with their occupation of space, these works carve out an existence.

The first thing you see upon entering the space is a gigantic brick wall, moving slightly in the breeze.  The bricks are, however, not real, but rather part of a curtain, a backdrop which seems like a prop from a long-gone past. This Brick Curtain by Sarah & Charles dominates and scenographically divides the exhibition space into four zones in which different things seem to happen, all related to this post-industrial reality of materials, from which mankind seems to be erased.

On one side of the space, closest to the door, is one of Davide Balula’s River Paintings, for which the artist submerges canvases in rivers and creeks to inundate them with water, soil, and algae. Balula’s investigation of the transformation and evolution of natural elements presents literally what remains – a faithful representation of the landscape, in this case of the area around Torsey Creek in Maine (US).

It’s a different kind of remainder then Loup Sarion’s Superstitious. These are man-made forms, sculptures based on drawings and collages of old industrial parts used in plumbing - such as pipes, faucets, and connectors. By adding anthropomorphic elements to these industrial remnants, Sarion creates new characters that inhabit this post-industrial reality of materials - their vaguely recognizable material and formal traits are simultaneously attractive and repulsive.

A similar feeling is evoked by the work of Nicolas Deshayes. Despite being comprised of slick industrial materials, his work maintains a slightly repulsive organic presence in the form of various bodily references. His Vein Section (or a Cave Painting) – a series comprised of vitreous enamel on steel which gave this exhibition its title – balances on the binary contradictions between future and past, organic and industrial, being and representing. Are we looking at a remnant of a human past or at the starting point of a new post-industrial future?

Amy Brener’s work closes the circle formed around Sarah & Charles’s brick curtain backdrop. Brener strives to encapsulate the present and depict it from a removed standpoint, as though examining a museum artefact. She traps everyday objects such as ferns, forks, fragments of combs, seeds, brackets, keyboards, and pliers in silicone – rendered useless, but preserved forever as time capsules. She treasures the minutiae of our time in the same way we do those of the ancient world, creating forms that resemble ruins, yet contain very specific – disposable – elements of contemporary life.

Scattered throughout the space are Pjotr Skiba’s small, fossilized remnants of our contemporary disposable culture, such as bronze casts of chicken wings, chopsticks, and plastic cups. Together, these works are at the same time a warning and a reminder of where we are inevitably heading.

A few years ago, artist Manor Grunewald started the first of what would become a series of exhibitions in his studio. Under the title Neighbours, he invited friends to show works in small-scale group shows. While this organic way of working – building on his personal network and that of his friends – created a situation in which nobody has full control, it also opened various opportunities. Following exhibitions from Ghent to Bologna which presented works by over twenty of his contemporaries, Grunewald was invited by Berthold Pott to curate a new Neighbours exhibition at his gallery space in Cologne.

For this sixth instalment of his Neighbours series, Manor Grunewald asked Thoms Caron to co-curate the exhibition. A former curator at S.M.AK., Ghent, Caron recently launched artlead.net, a platform dedicated to making art accessible to a wider audience by means of a curated online marketplace, a contextualizing journal, and a series of art in public space projects. Together, Manor Grunewald and Thoms Caron curated Vein Section (or a Cave Painting).

Amy Brener (*1982, Canada – lives and works in New York). She was recently included in Greater New York 2015 at MoMA PS1 in New York. Her work has been exhibited internationally at institutions and galleries such as Wentrup Gallery in Berlin, Derek Eller Gallery and the Katonah Museum of Art in New York, Pact in Paris, and Susan Hobbs Gallery in Toronto.

Sarah & Charles (*1981 / *1979, Belgium – live and work in Brussels). Solo exhibitions have been presented at Z33, Hasselt; De Brakke Grond, Amsterdam; and Netwerk, Aalst, and Nest, The Hague. Their work has been shown in several group exhibitions at venues such as Marta, Herford; the Museum Dhondt-Dhaenens, Deurle; Hermitage, the Amsterdam; the Stedelijk Museum, 's-Hertogenbosch; and Wiels, Brussels. Their films also screened at international film festivals such as the Film Fest Gent and the International Festival of Films on Art, Montreal.